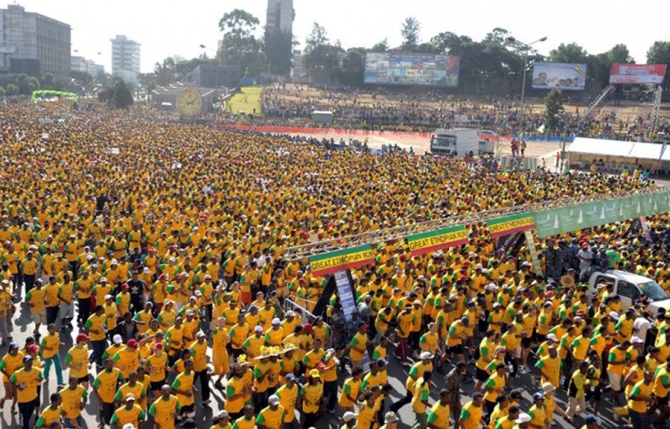 The competition was first envisioned by neighbors Ethiopian runner Haile Gebrselassie, Peter Middle brook and Abi Masefield in late October 2000, following Haile's return from the 2000 Summer Olympics. Middle brook established the proposal which Masefield presented to Brendan Foster, originator of the Great Run series at the advice of her mother and close friend, Andrea Won for. Richard Nerurkar arrived in March 2001 when the idea was first shared with former British Ambassador to Ethiopia Myles Wick stead, who subsequently championed the race. The 10,000 entries for the first edition quickly sold out and other people unofficially joined in the race without a number. The creation of the race marked the first time that a major annual 10 km race had been held in the country, renowned for producing world class runners. The day's events include an international and popular 10 km race and a 5 km women only race.

The elite race attracts a number of prominent runners. Haile Gebrselassie won the inaugural men's race and at the second edition many of the country’s top long-distance runners competed, with Gebre Gebremariam, Sileshi Sihine and Kenenisa Bekelecomprising the top three in the men's race and Worknesh Kidane and Tirunesh Dibaba taking first and second in the women's race. Although more established competitors do take part, the race is known for highlighting the best of Ethiopia's up-and-coming running talent – many of the race's podium finishers, little-known at the time, have gone on to achieve success on the global stage.

By 2005, the number of race entries had grown to 25,000 participants.[ There were around 35,000 runners competing at the 2010 edition. The combination of the quality of the national elite field and the time-impeding altitude of Addis Ababa (8000 ft) means that the international race does not attract many elite runners from other countries. Given the prominence of the race and its importance to emerging athletes, the races - particularly the men's - are hotly contested with large leading packs early on and much physical interaction. Standing in contrast to other large scale running events, fun runners at the Great Ethiopian Run do not typically compete to raise money for charity, but instead compete for their own personal reasons.

The competition has had high profile headline sponsors over its history: it was sponsored by Total from 2002–2003, Toyota from 2004–2008, and Ethiopian Airlines has been the current title sponsor since 2009.