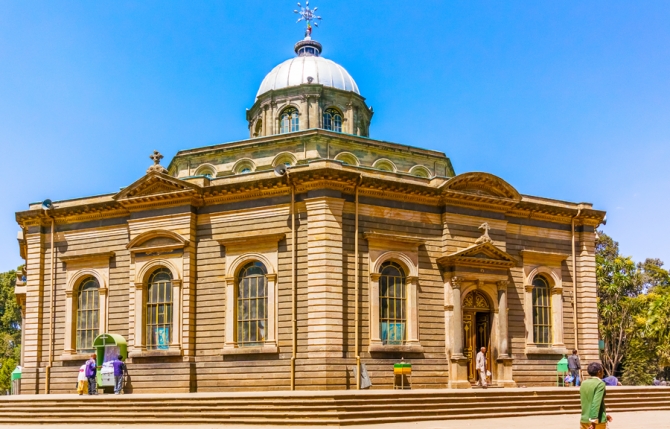 Designed by Sebastiano Castagna and built by Italian prisoners of war defeated at Adwa in 1896, it was named after St. George, after the Tabot (Ark) of the church was carried to the Battle of Adwa against the Italians during which the Ethiopians secured victory. The building was described in 1938 in an Italian tourist publication as a fine example of the European interpretation of Ethiopian church design. The Italian Fascist authorities set the building on fire during the war in 1937. The cathedral was later restored by the Emperor following the liberation in 1941.

Empress Zewditu of Ethiopia was crowned at this Cathedral in 1917, and Emperor Haile Selassie was crowned there in 1930, and it became a pilgrimage site for Rastafarians. The Cathedral has a museum, and an Imperial throne is on display as is the stained glass works of artist Afewerk Tekle. Given the reason why the cathedral was named, it displays weaponry used in the wars against the Italians including curved swords and tridents and giant helmets made from the manes of lions.