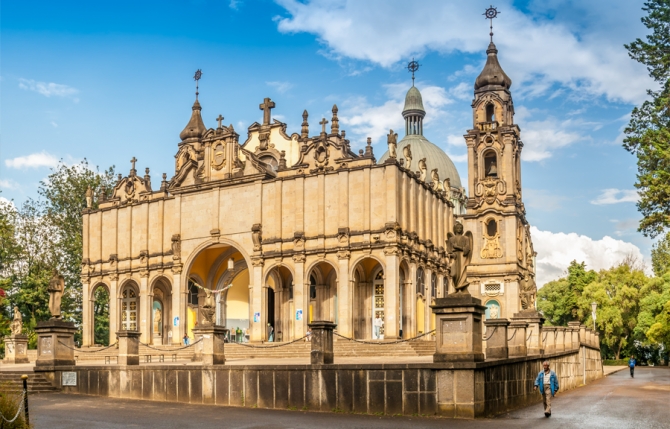 Holy Trinity Cathedral, known in Amharic as Kidist Selassie, is the highest ranking Orthodox cathedral in Addis Ababa,Ethiopia. It was built to commemorate Ethiopia's liberation from Italian occupation and is the second most important place of worship in Ethiopia, after the Church of Our Lady Mary of Zion in Axum.

The cathedral bears the title 'Menbere Tsebaot', or 'Pure Altar'. The church compound is the burial place for those who fought against the Italian Occupation, or those who accompanied the Emperor into exile from 1936 to 1941. Emperor Haile Selassie Iand his consort Empress Menen Asfaw are buried in the north transept of the cathedral. Other members of the Imperial Family are buried in the crypt below the church. The High Altar of the cathedral is dedicated to 'Agaiste Alem Kidist Selassie' (Sovereigns of the World the Holy Trinity). The other two altars in the Holy of Holies on either side of the High Altar are dedicated to St. John the Baptist and to 'Kidane Meheret' (Our Lady Covenant of Mercy). In the south transept of the cathedral is a recently added chapel of St. Michael, which houses the Tabot or Ark of St. Michael the Archangel, which was returned to Ethiopia in February 2002 after being discovered in Edinburgh. This relic was taken by British forces from the mountain citadel of Magdalla in 1868 during their campaign against Emperor Tewodros II.

The Cathedral complex also includes the 'Bale Wold' (Feast of God the Son) Church, which is also known as the Church of the Four Heavenly Creatures. This church served as the original Holy Trinity Monastery Church before the building of the Cathedral and dates back to the reign of Emperor Menelik II. Other facilities include a primary and a secondary school, a monastery and the Holy Trinity Theological College, a museum and monuments housing the remains of those massacred in Addis Ababa by the Italians in 1937 in response to an assassination attempt against the Fascist Viceroy of Italian East Africa. In addition is the monument and tomb of the officials of the imperial government who were executed by the Communist Derg regime. Holy Trinity Cathedral is the official seat of the Orthodox Archdiocese of Addis Ababa. The Patriarchs of the Ethiopian Orthodox Tewahedo Church are enthroned at Holy Trinity Cathedral and all Bishops are consecrated there as well.

The tombs of Emperor Haile Selassie I and Empress Menen Asfaw, and other members of the Imperial Family, are inside Holy Trinity Cathedral. The late Patriarchs, Abune Tekle Haimanot and Abune Paulos of the Ethiopian Orthodox Church, are buried in the churchyard, as is the famous British suffragette and anti-fascist activist Sylvia Pankhurst. The late Prime Minister Meles Zenawi, and other prominent Ethiopian are also buried there.